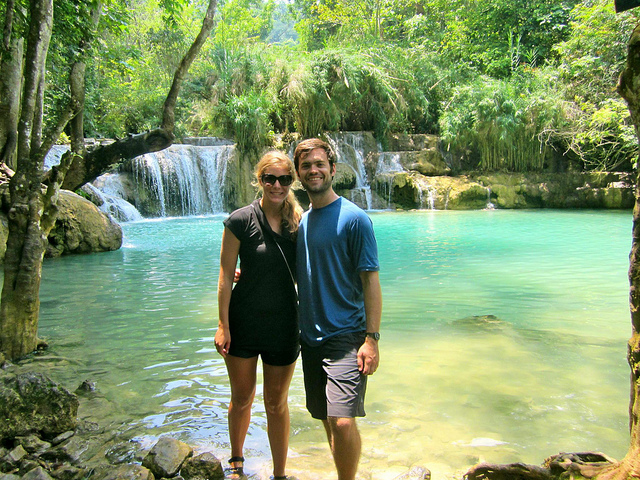 We celebrated our 3 month travel anniversary with a fellow Chicagoan we met on a sleeper bus from Vientiane to Pakse. Up until this point we haven’t missed home much or even considered the fact that we won’t be home for another 8 months! The month started with a cruise down the Mekong River to the picturesque Luang Prabang, Laos. We spent the week celebrating Lao New Year and arming ourselves with liters upon liters of water to take on the locals in a city-wide water fight. After a quick stay in both Vang Vieng and Vientiane, Brian joined us for a riveting 2 day journey through the Bolaven Plateau visiting breathtaking scenery and waterfalls, finding cover during storms and dealing with our constantly stalling motorbike. We continued down together to the 4,000 islands where they aren’t kidding when they say there is still NO ATMs on the islands. There is not much to do on the islands except simply relax and take an occasional walk around. As we sat around with Brian we discussed our favorite restaurants and bars in Chicago, the upcoming first days of spring where everyone in the city is outside biking, and of course North Avenue beach with my favorite weekly volleyball games. The reminiscing was fun, and for a brief minute (or two) we admit it made us miss home. Then the sun set over Don Khon and we remembered that home will be there when we get back. Our travel experience is something we wouldn’t trade for anything…but we do still miss Nookies on Wells St. in Chicago. 🙂 The last month has been the toughest yet. While we prefer slow travel and lingering longer we found ourselves moving much more quickly through Laos. After an exciting week celebrating the Lao New Year we headed south through Vang Vieng, Vientiene, Bolaven Plateau and 4,000 Islands all in one week. Dealing with transportation every few days becomes exhausting. Negotiating when and where you are moving is tiring in itself and then you never know what to expect when you arrive at the bus station. We’ve been lucky enough to experience buses with broken air con, a seat that wouldn’t recline, and paying for one form of transportation and ending up with another. Travel days can be pretty stressful, but are usually pretty funny and ridiculous in hindsight. This is our first month of 3 major “OH CRAP” moments. A quick overview of what has gone wrong this month:

1. Josh was sick in Vang Vieng. He may finally start listening to me when I tell him to lay off the mayonnaise. Apparently many other travelers have gotten sick from the mayo in Laos probably due to the high heat and long past expiration dates. He ordered an omelet sandwich and never would have guessed that it would have included mayo, but in Laos mayo is a staple on everything! Be aware!

2. Our Charles Schwab card went missing. After bragging about how awesome we were for saving money on all our ATM fees, we’re back to being normal suckers paying $5 + 3% on every ATM transaction until we can get our new card in June. It still might be buried in the bottom of our bag, but after a intensive search of every pocket and fold in our bags/clothes we agreed to cancel the card and apply for a new one to be safe. Luckily no money was taken from the account so if it is somewhere on the streets of Vientiane, someone was kind enough not to use it. Ugh. Make copies of all your cards and keep them in a safe place (something we didn’t do!)

3. We ran out of cash. To be specific we had plenty of money in the bank, but as mentioned above the 4,000 islands aren’t kidding about having NO ATM’s. We took over 1 million kip with us to the islands and by the last day we were eating noodle soup (which was delicious) for every meal in an attempt to have enough money to cross the border. In a savvy exchange with Brian we sold him our baht for some USD to get us enough to cover the Cambodian visa if there were no corrupt immigration officers. After finding the only ATM between us and the border broken, and stressing out we found more travel angels that loaned us an additional $4 for the stupid bribes and $2 for lunch when our bus stopped at a roadside stall. $6 might not sound like a lot, but in Cambodia that is a couple of meals. We didn’t get to an ATM until 9 hours later and paid everyone back after picking up some guilty pleasure snacks (pringles and coke!) Once we arrived in Phnom Penh we heard the loud honks and constant “tuk-tuk?” yelled at us we were for some reason, at peace. We saw endless street stalls and were glad to be starting month four in a bustling city. The next month will take us through Cambodia and Vietnam. Still plenty of long distance travel to go so stick with us!

Check out our Flickr sets from our time in Laos: