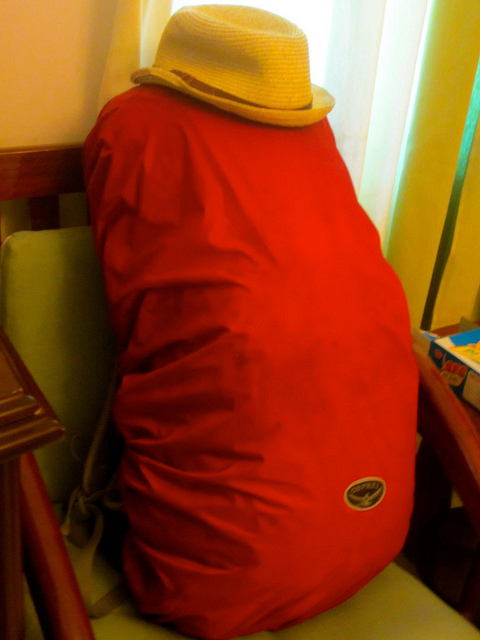 It had to happen sooner or later.

For over 7 months, whenever I’m riding public transportation in a foreign country I’m “aware of my surroundings.” I can’t even count the number of buses, trains, planes, boats, canoes, tuk-tuks I’ve been on and all the while have been vigilant, bordering paranoia. Someone is going to try and take my things.

These are my things. I worked hard to get them. No one is taking them away from me.

I remember reading this near-pickpocket attempt by our friends Tony and Meg at LandingStanding early in our trip. One thing that has always stuck in my mind as I travel is to watch for distractions. This type of advice has always seemed counter-productive to me. By its very definition, a distraction should capture your attention and divert it from what you should be paying attention to. Today I experienced that type of distraction.

We have to go back to the beginning, one day earlier. We were leaving Rio de Janerio, a “dangerous city” where we felt completely safe the entire time we were there. People were friendly and helpful and we had a ton of fun. Some fellow travelers had warned us about safety in Buenos Aires, which is something we had never heard about the city. We planned on spending the night in the airport but managed to get our flight changed and found ourselves heading to Argentina without a place to stay. After several unsuccessful attempts at booking hostels, we dipped back into my SPG account and booked 1 night at a downtown Sheraton, since we’d be arrive close to 10 PM.

We got upgraded to the Presidential suite. We went from sleeping in the Sao Paulo airport (my least favorite airport yet) to a room with a king bed, our own sauna and hot tub, and more furniture than we had in our old apartment!

My platinum status gets us late checkout (4 PM!) and so we took full advantage and relaxed all day in our gigantic suite. I didn’t realize this would mean we were getting on the subway to Palermo–where we had booked an apartment on Airbnb–near rush hour, but we were on such a high from our luxury hotel experience we didn’t have a care in the world!

The train was packed. Barely any room to stand, and we were carrying all of our bags. We each had our backpack, our small bag with our electronics, Care’s purse and another bag of snacks that we had bought in preparation for our airport sleepover.

We obviously look like gringos and the amount of bags we carried surely didn’t help. We tried not to speak English to each other, but we are still at the point where our español reaches its end pretty quickly in a conversation. After a few stops, Care tells me that the guy next to her unzipped her backpack.

I didn’t believe her at first. Everyone around us looked normal (as if I knew what a pickpocket looked like) and I thought she was just being paranoid. The guy had put his jacket over her back and unzipped the small pouch on the side (luckily, we don’t keep anything of importance in these little side pouches). Care lifted his jacket and pushed him away and glared at him the rest of the trip making it clear she knew what he was up to.

A few minutes later, an older man pushed himself between the two of us, as if he was going to go sit down, but then just stood there (he was one of the four in the group). Realizing that now we were separated, and that probably wasn’t good, Caroline squeezed her way through, back to where I was standing. At this point I couldn’t keep my small bag safe on my shoulder, so I lowered it down in front of me with the other bag, which also freed my other hand to watch my pockets. I was also noticing how the group of guys around us, including 2 standing and sitting down, all seemed to be looking at each other and at us. They were talking to each other but none of them were making any eye contact with the others. It was an uneasy feeling.

All of a sudden, the distraction came, and much to my amazement, both Caroline and I recognized it immediately.

Just before we approach the next station one of the guys takes a handful of coins out of his pocket and fumbles them all to the floor. This was it! The distraction! Anyone who rides a subway on a regular basis knows that if you drop a coin in a busy car, it’s gone. No one in their right mind is going down there to get it. This muchacho crouched down and went right for my jeans and my bag. It’s one of those times where your mind goes, “Really? This is happening right now?” but you still manage to react. I don’t know if I’ve ever been as proud of my wife, as together we shove the guy to the floor of the car. Care keeps shouting, “NO!” at the guy who—since he clearly failed—tries to act like he’s just picking up his coins.

I know that his team is moving around us and between pushing the guy and feeling my pockets, no one seems to have taken anything. The car is pretty quiet and even after our public display everyone continues to sit in their seat like nothing happened. I notice later that my side pocket of my backpack is open, but nothing seems to be missing. As luck would have it, the empty case that my iPod Touch was shipped in was in this pocket (I don’t know why I kept it) and it fills the entire thing, making it difficult to get anything out. It probably looked like a phone or wallet, and made it a target. I look around and every one of the group of guys I had noticed is gone, I feel awkward, violated and still unsure.

Luckily, the next station was our stop and we could get off the train and head to the apartment. A porteño woman who got off with us, turns around and asks us if anything was taken. We indicate “no”, and she shakes her head in disapproval, and adds that we probably shouldn’t carry our big backpacks on the subway.