With summer coming up quickly, we start to reflect on our most memorable adventures we’ve had during the summer months.

If you haven’t spent a summer in Europe, it’s one we highly recommend. The festivals and activities you won’t want to miss. We spent a summer jumping from the Running of the Bulls, Tour de France, Zurich Festival and more, with one of the highlights being running with the bulls.

For the week around the festival Pamplona is boarded up. If you are looking to experience daily life in Spain, skip Pamplona during San Fermin – if you are looking to participate in a long held tradition of running with the bulls, then come prepared for a 24/7 weeklong party. 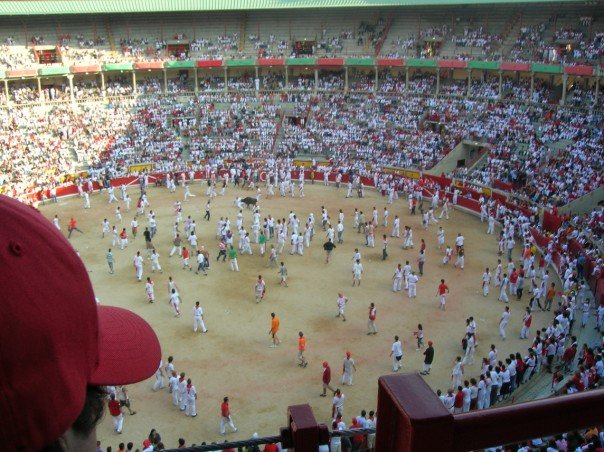 What is the Running of the Bulls?

The event began with honoring San Fermin, patron saint of Navarra and the need to transport the bulls from the corrals to the bullring, where they would be killed that evening. Young kids would show off their bravery by dancing around the bulls and taunting them. In Pamplona, the six bulls in the event are still those that are featured in the afternoon bullfight that evening. In recent years, the religious aspect has been mostly lost and the festival is centered on people from around the world coming together to participate in a gigantic party.

The San Fermin festival is held July 6 – 14th every year. The run takes place every morning from the 7 – 14th at 8 am sharp. After two rockets are fired, the bulls charge behind the runners for 825 metres from the corral to the bullring. Although the run usually only takes 3 – 4 minutes, the energy and adrenaline during those few mintues makes it feel like much longer. A third rocket is fired signaling that all of the bulls have made it into the bullring as they close the doors behind them. 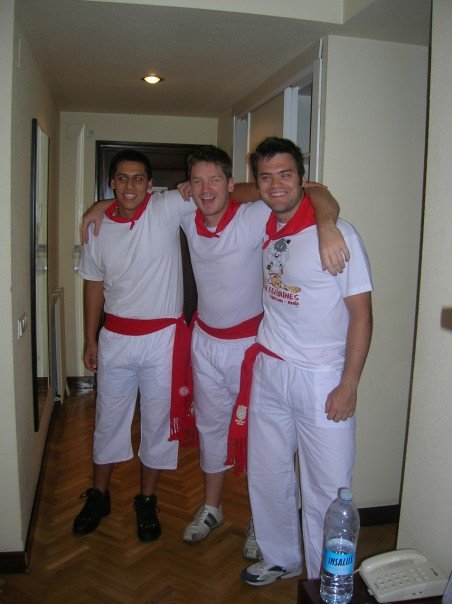 We woke up at 5:30 AM to get to the encierro, the running course. It starts at 8 AM and only lasts about 4 minutes, so if you’re late, you miss the whole thing. The girls got in line to get tickets for the bullfight later that evening, and the three guys went to the bull run course. (Women are allowed to run, but the majority of runners are men) We were an hour and 15 minutes early, so we spent the time checking out spots to start, and being incredibly nervous. Two days earlier, two brothers had been gored by the same bull, and were still in the hospital. While waiting we met another guy from Indiana University (small world!) who had come from Barcelona for the day just to run with the bulls.

so there we were… adrenaline building… waiting to run from 6 incredibly angry bulls.

The area we started in was about 40 yards from the double bend in the course, which is supposedly the safest section (we did our research). Our plan was to run up to the bend and be able to jump over one of the fences to safety if we needed to escape some angry horns. The streets were filled with people, until about 5 minutes before the start when large groups of people starting heading further down the course. This could have been either good or bad, good because there were fewer people to trample us, bad because there were fewer people between us and the bulls! At about 2 minutes to go, everyone started jumping around, yelling and getting really excited. At this point, all of our nerves were on full alert, and there was no turning back.

At 8:00 AM, they fired the cannon letting us know that the bulls were released. It only took about 30 seconds until we could see the bulls down the street. We all yelled “El Toro!” and turned and ran with the crowds. As we got to the fences, the bulls were already upon us. The guy right in front of me dove through the fence, and I jumped up after him, right as the bulls rounded the corner and came past. They were so close, that by the time I jumped on the fence, and turned around, there were no bulls. Watching the video later that night, we could see one of the other guys we were running with hop on the end of the fence and we watched as the bull’s horn barely missed his left calf. It was only a few seconds and the bulls were already gone. We couldn’t believe how quickly they got to us and how quickly they disappeared.

Most people try and make it all the way into the bull ring, where you can have your own amateur bullfight with the bull. We didn’t know that they closed the gate as soon as the bulls passed, so we weren’t able to get in. It was pretty wild watching random people try to go one on one with the bull, and by wild we mean pretty stupid. 🙂 Many people who run with the bulls have been up all night on serious drugs or an all-night drinking binge…so you can imagine how that increases their confidence…and stupidity when dodging the bulls.

Once the amateur bull fight was over, we spent the rest of the day wandering around Pamplona. We did go to the bullfight that night, and while we were glad to experience it since it is a longstanding tradition in Spain, It was pretty cruel and difficult to watch. The bulls have been abused and drugged before they even make it to the ring and many bulls are injured during the run earlier in the day by slipping on the streets, so they are already at a big disadvantage at the onset of the bull fight. I understand it’s tradition…but I found myself cheering for the bull during the fight… We won’t attend another bullfight.

Our best tips for running with the bulls 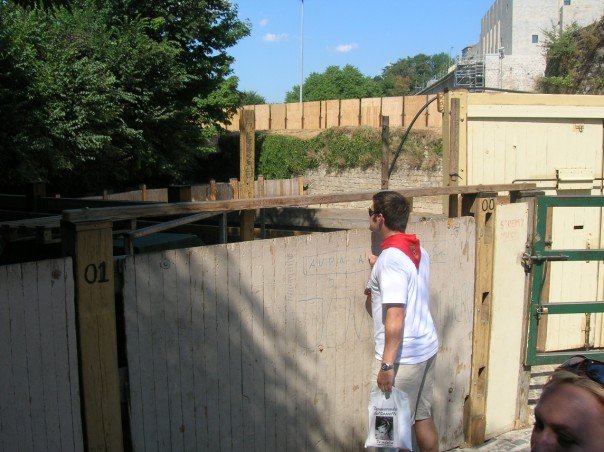 Don’t run on your first day there

Use your first day to watch the run and get an idea of what to expect. Walk the course and scope out a good exit strategy in case of an emergency.

Fear the crowds more than the bulls

It sounds backwards, but the mass of people that surround you are more dangerous than the bulls. Even if you have been smart and come prepared, they most likely have not. If one person in the crowd trips, 10 will go down, and you don’t want to be on the ground when the bull runs by you. Pay attention to your surroundings and be aware of the people around you. Be a “defensive” bull runner. 🙂

Don’t run with the bulls… run behind them

If you want to make it into the bullring, run behind the bulls and follow them into the ring. Avoid running too close in case one of the bulls decides to quickly turn around and make trouble. Once you get into the ring find a safe spot to watch from, I wouldn’t suggest agitating the bull – leave that to people who have run before or drank too much…

If you want to party, do so every other night except the one before the race. You want to be alert and ready when the massive bulls run past you.

Have you run with the bulls in Pamplona? Is it on your bucket list? We want to hear your story!