We arrived in Paris two nights ago. We are spending the summer between Spain and France with our two littles, working and traveling. No crazy adventure, just living over here and introducing our littles to the different languages and cultures. If you’ve ever traveled with littles a six hour time change isn’t fun. We were eating second dinner last night at midnight because they were both up insisting they were hungry.

Anyways let’s rewind together to 48 hours ago. I want to share how we got here and why traveling makes you a better wife or husband.

Our six hour flight from Philly turned into nine hours of sitting on an airplane because of one malfunction.

That was after our first flight, Indy to Philly, was delayed one hour and we waited 20 minutes for our gate checked stroller and bags to arrive off the plane.

The bags came, and we took off in a full sprint.

We had 10 minutes to find the transfer hub, and get on the bus that took us to our terminal. We found the hub and the bus, and of course that bus driver drove like a sloth (no offense, we were just in a big hurry). So we rode the short bus ride that felt like the longest bus ride to terminal A.

Next was the sprint…I mean sweat from A1 to A21. We didn’t know how far the gates were apart, we just knew the gate numbers. If you’ve been to the A terminal in Philly you know they are long. We ran. and ran. and ran.

If you have been to Philly and feel the urge to comment and insist you know the terminal and tell me –> “It’s not that far”, try holding a 16 lb wiggly baby, two backpacks and rolling a carry on … Oh, and all the while make sure the toddler next to you doesn’t have a meltdown, trip, or run into the airport transfer cars. Trust me, it’s far.

We got lucky. It was nothing that we did, or how fast we ran.

Two American employees were waiting for us calling our name. More than that they were making a pun [brownie points American]:

We weren’t eating we were running. Literally.

Josh carried the 16 lb stroller in our new backpack carrier (did you see the video?), two roller bags and his laptop bag.

We were the last ones on the plane, and everyone turned and looked when this mom walked on with two kids in a full sweat taking out everyone down the aisle with all the bags and babies I was trying to juggle. So much so that a nice gentlemen insisted I leave my bags and he would follow me down the aisle to help. Probably more for the safety of everyone in the aisle seats.

I swore we weren’t going to make it. I’m not being dramatic, seriously I was laughing while we ran because of how ridiculous it felt due to how late we were. I have only seen this in the movies where people literally sprint through the airport, and I was doing it with a baby and a toddler.

They held the plane. Thank you American. 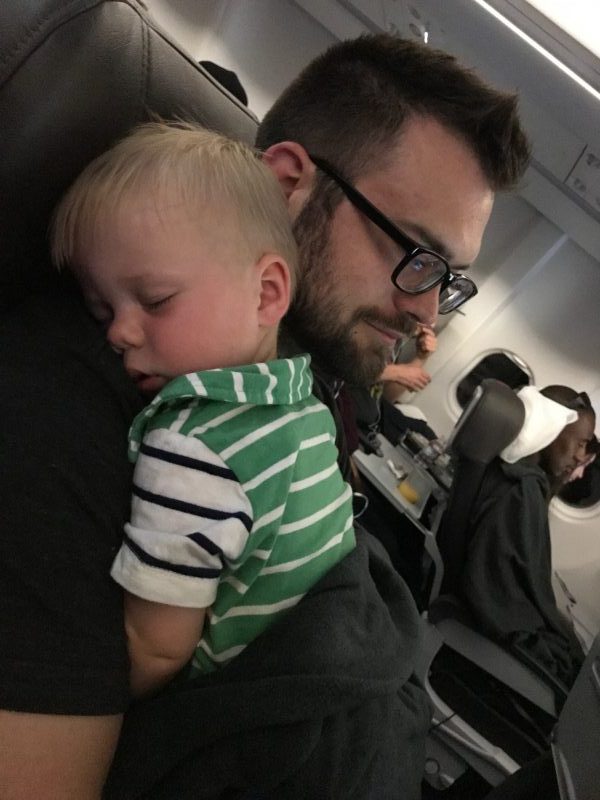 And then we malfunctioned … and sat. We sat for three hours. I was just happy to be on the plane, the malfunction didn’t bother me like it did everyone else around me.

Let me note the kids rocked the three hour delay on the plane. We walked the aisle and played with every toy we brought.

The takeoff the kids didn’t so much rock. At that point they had been up for way too long and they were tired. They screamed (sorry everyone on that flight) and then they slept. They slept the entire 6 hour flight (you’re welcome everyone on the flight). Josh and I, not so much. It’s hard to sleep when you have babies on you in an uncomfortable airplane seat, but we did what we could. Well I did, Josh watched a movie, while I did what I could to sleep.

Oh, I forgot you were reading this to find out how traveling strengthens your marriage.

Because travel puts you in stressful situations. It makes you constantly make decisions from simple where are we going to eat , to difficult logistical situations. You are put in new situations with new cultures. You might not be able to speak the language or read any of the signs around you. You are outside of your comfort bubble and because of that you feel insecure and on the defense.

You’re frustrated, in a hurry, all the feelings are heightened and you fight. There I said it, you fight. This sounds backwards, but you fight so much when you travel that you actually learn to get over the stupid fights quickly and become really good at communicating. And I would say that 99% of your fights when traveling or not traveling are the stupid ones.

You’re in a bad mood and picking a fight for no reason other than you’re hungry, tired or grumpy. But traveling forces the fights and that makes your relationship better.

You apologize quicker, you accept your part of the dumb fight and you all move on so much quicker. Decisions become quicker, you become more laid back not because you are this crazy calm person, but to survive traveling together you have to become laid back about some things, because a lot of things are out of your control. So you go with the flow more and you are OK with change and you realize that if you work together as a team you will figure it out and it will all be OK. It won’t be all as planned, but it will all be OK, and sometimes better than planned.

But just because you become more flexible, doesn’t mean you don’t fight.

Josh and I are great at communicating… and fighting. And with all the traveling you think we would have learned our lesson, but when you’re stressed you still occasionally snap and are forced to apologize and move on quickly.

Follow the next few months and I’ll be sharing more stories from our adventures in Europe!