Grab a cup of coffee…this is a long post.

So, what is the World Domination Summit?

I honestly went into the conference not knowing what to expect. Most conferences are focused on business cards and the ultimate, “what is in it for me” mindset. I usually look at the ROI of each conference and leave asking myself if I would return based on the business that I got out of it.

This conference is different… 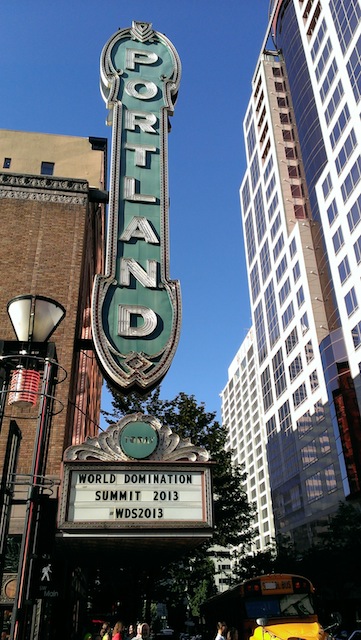 In order to succeed and enjoy yourself at the World Domination Summit you need a big change of mindset. This conference is about making great connections, meeting likeminded people, each one doing remarkable things. As you network at World Domination Summit the last question you will hear is what do you do. The questions are focused on what are you creating. How are you using your unique skill set to make this world a better place. How are you impacting your community, and what actionable steps are you taking to make your ideas happen? It’s a conference about being yourself and working together to give back to the community. It can be a humbling experience, and it can also light a fire and get you moving.

I would be lying if I didn’t admit, I still left asking how each new connection and I would work together in the future, or where our paths would cross again – but it was different, not ROI, but relationship-centered.

A brief overview (in my own words) of World Domination Summit 2013.

We Broke a World Record! 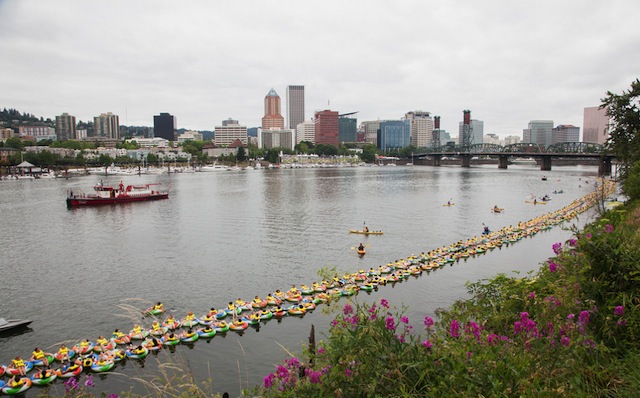 We climbed into the Willamette (it’s the Willamette, dammit) River, to break the Guinness World Record for Longest Floating Human Chain. We were pulled out in groups by jet-skis where they left us holding a rope so we wouldn’t float away. In the end we connected 620 people and broke the record!

Floating in the river, with 620 strangers, I couldn’t stop laughing and thinking about where my life had taken me and how ridiculous, but amazing it was that I was sitting in an inner tube in the middle of a river in Portland, breaking a record that no one cares about (yet somehow I am so proud to be a part of!).

We Rented Out the Oregon Zoo 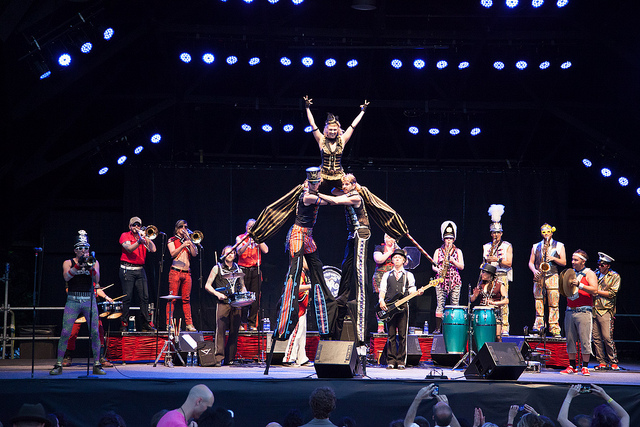 … and heard the rockin marching band, March Fourth. The opening party was in the go big or go home mentality. We didn’t just rent a part of the Zoo, we rented the entire Oregon Zoo and all 3,000 attendees took over. The band was ridiculous and amazing. They jammed out like I have never seen a marching band jam before.

Everyone at WDS has creative ideas, business ventures or non-profits planned, and Nancy was here to show us how to get our stories heard. Nancy dissected 4 of the best speeches ever given and visually showed the anatomy of why they are great. Ultimately, “you are not the hero. Your audience is.” Your success as a story teller is measured by how greatly you transform that hero. She showed us how no matter the topic, the basics of a great story and a memorable speech stay the same.

If this at all interests you I suggest watching her TEDx talk on the subject:

We saw Darren Rowse dress up as Superman 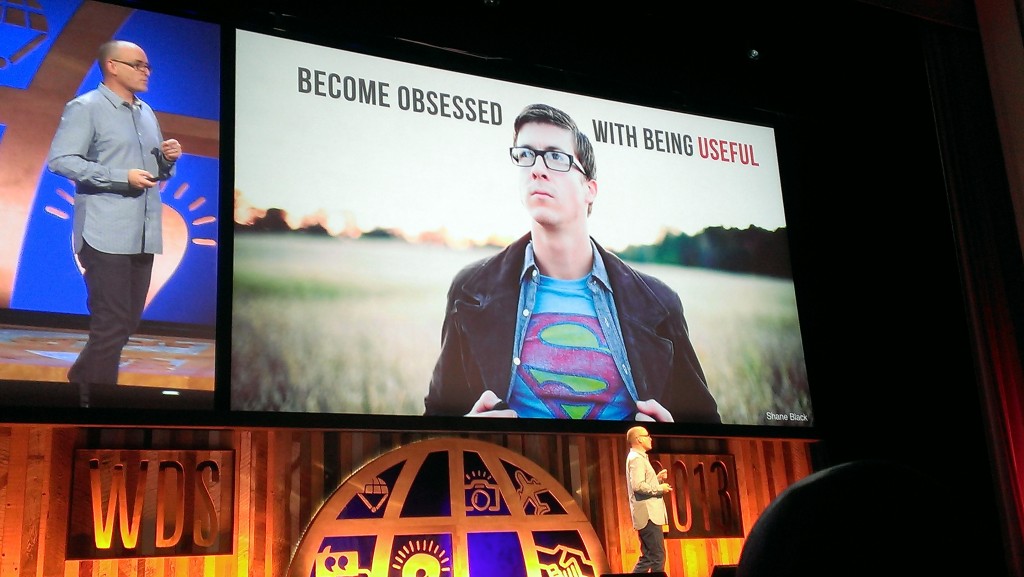 OK, So Darren said some really important things like when you have a dream follow it, no matter what. You don’t have to know everything when you start out, just start. What struck me most was, he suggested at the end of the day ask yourself what gave you energy. What excites you is where you should put your energy.

We heard about his journey with problogger and digital photography school, and how he encourages us to become hyper aware of other people’s problems. Have the goal of making yourself useful and helping solve these problems.

… but in the end we all got our wish to see Darren dress up in a Superman costume, which was of course the highlight of the speech. 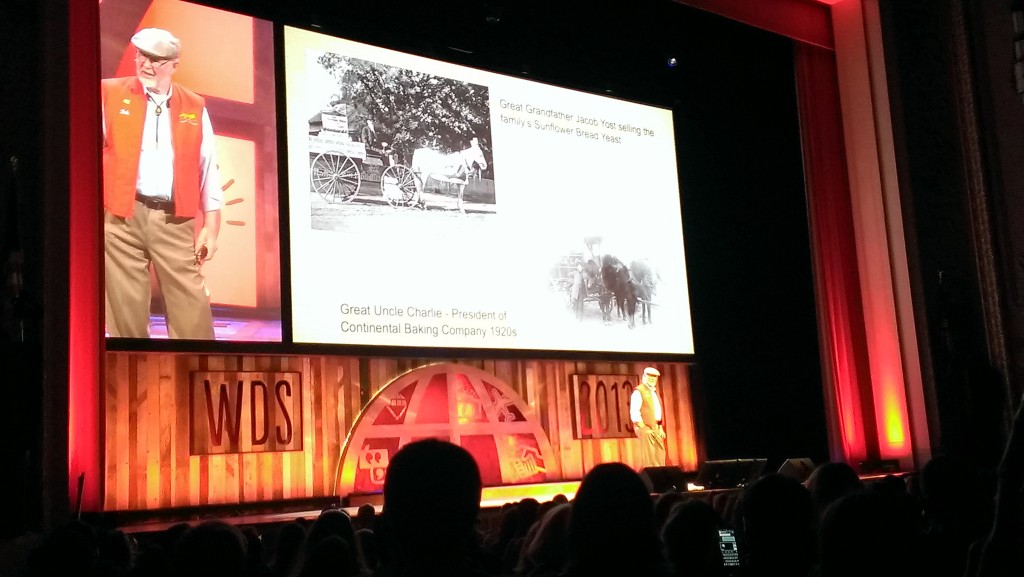 Bob’s Red Mill is a really cool company, with a really cool back story. It was a great case study to see on how giving back to your people, and choosing your employees over profit will create a company culture that sticks around.

… I highly suggest you listen!

We did the Foodie thing around Portland

We ate…ate…and ate some more. Portland has anywhere between 300 – 700 food trucks at one time serving cuisines from around the world. We tasted koi fusion tacos, savory crepes, gourmet grilled cheese sandwiches, Kansas City BBQ, delicious pho and spicy Thai dishes. Stay tuned for our favorites – the food scene there will take up an entire post in itself. 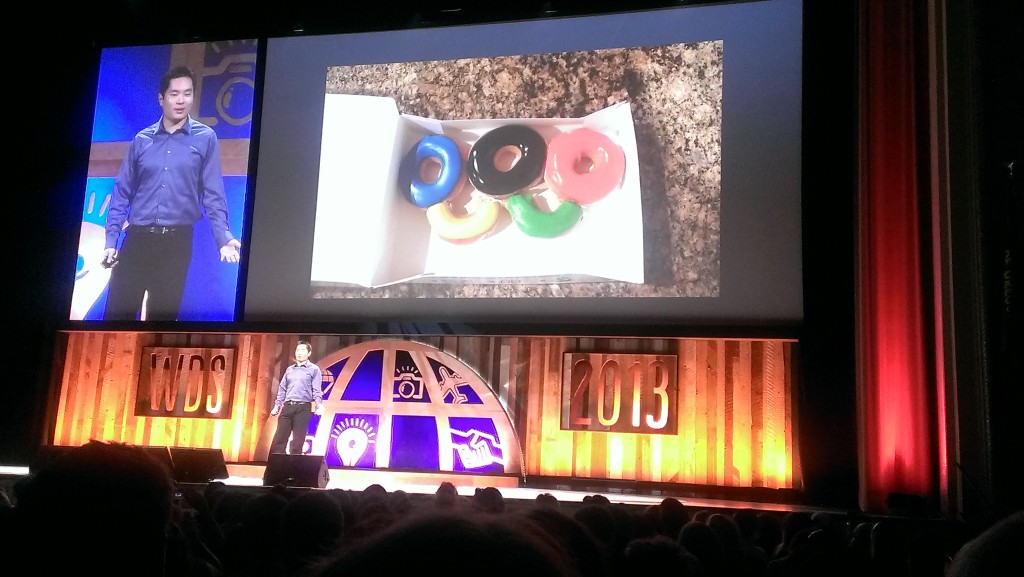 As I mentioned earlier, everyone has an interesting story at WDS and Jia Jiang is one of them! He has perfected the art of being rejected, and overcome the fear of hearing the word no. Fear of rejection ranks high up there with public speaking in most of our minds. By putting himself in 100 different situations to be rejected, he found that most people want to help and say yes more than reject…you just have to ask!

Chase made a lot of great points about our education system being broken and the importance of working in creative activities in schools. Instead of teaching rules and guidelines in schools, allow our children to play and embrace the art of creativity. If you’ve read Seth Godin’s manifesto, Stop Stealing Dreams, it reminded me a lot of this. If you haven’t read it, I suggest you download it now – It’s free! 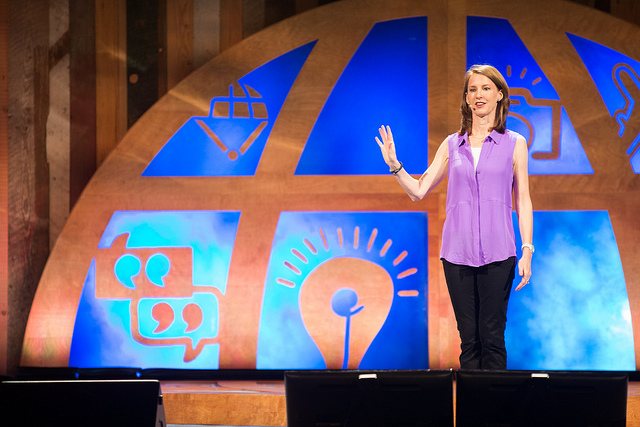 Gretchen had all 3,000 attendees pull out a piece of paper and pen and write down our answers to these two questions.

2. What do you find yourself lying about?

Her point was in order to find happiness you don’t always have to feel 100% happy all the time. You need to acknowledge the negative feelings and figure out why you are having them. An example with these two questions – once you figure out who you envy and why, begin to set your life up so you have that thing or lifestyle that you envy. Also when you determine what it is you are lying about, align your life so you are either living in a congruent way, or you stop lying about it and begin telling the truth in conversations. This will in turn take away stress and help you feel happier has a result.

We heard Tess Vigeland ask herself What The Hell Are You Doing? 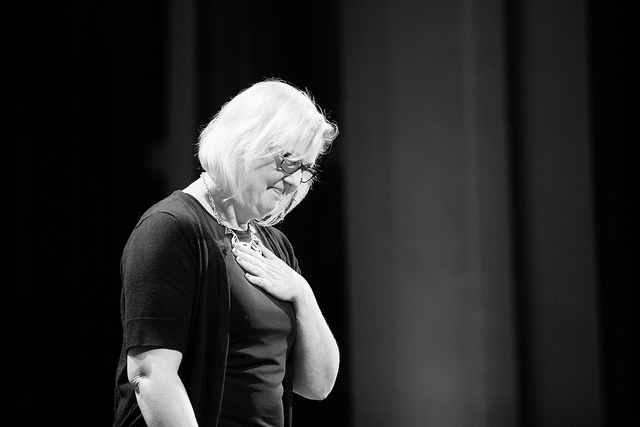 You are not defined by your job. Words that are much easier spoken than practiced. Tess had what looked like the perfect job. Millions of people wanted to hear her opinions and views on various subjects. She had climbed high in her industry quickly and enjoyed it for nearly two decades. Now, what’s next? After internally struggling with this question, she walked away from it all and immediately asked, “Tess, What the hell are you doing?”

At WDS Tess gave an honest account of her thoughts, emotions and current state of mind after leaving her job that she let define her. Her search for a new purpose in life while trying to find validation somewhere other than weekly ratings. In her speech she repeated multiple times “Tess, what the hell are you doing?” You could tell while this was meant to add emphasis to her speech, she really did mean it. There are a lot of people in the 9 – 5 that get to the end of 30 year careers and are faced with this question, “What the hell are you going to do next?”

We overcame our counter mind with Andrew Warner

You know that self doubt that creeps in after you finally get the confidence to get outside your comfort zone? When you want to introduce yourself to someone new… but what if they don’t like you. Or you want to publish a new book…but what if no one likes it. This self doubt is paralyzing and recognizing it and overcoming it will open you up to so many more opportunities. Andrew showed us some great actions we can take to overcome our counter mind and let our true mind take over.

Learned a little bit more about publishing a book 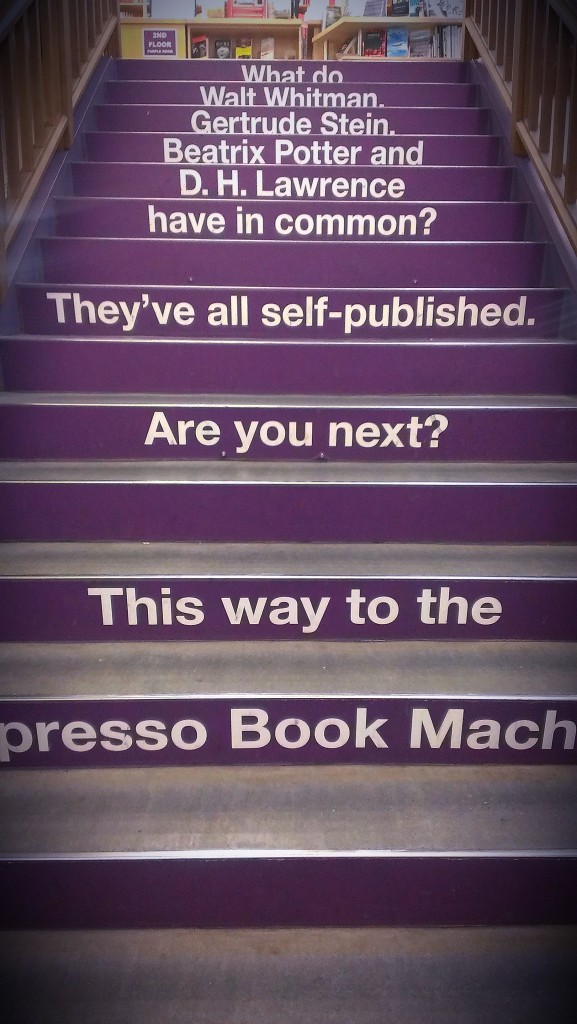 During a break out session, David Fugate broke down the pros and cons of self-publishing vs going through a traditional publishing company. It was extremely helpful hearing his first hand experience, opinions and honest answers to what works and what doesn’t. Everyone in the room had a question for David after the session. It was cool to sit in a room full of people who had already written their own books or were full of ideas to write. I had some great takeaways that I plan to use in my own future book(s) (stay tuned).

Steve Schalchlin touched our hearts with his struggle with AIDS 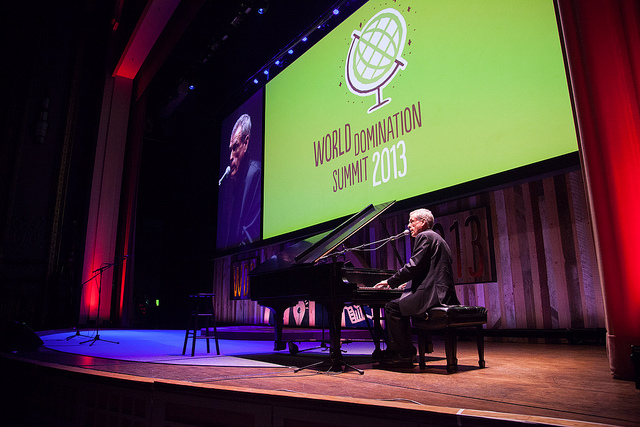 The entire weekend is about creating, and the importance of exercising your creativity muscle. Steve took his anger, frustration, confusion and turned it into an off-broadway musical. He opened up and told his story of hitting his lowest points and the emotions that went through his head. He was able to incorporate humor into his songs while he belted at the top of his lungs his story of how he has continued to survive AIDS. 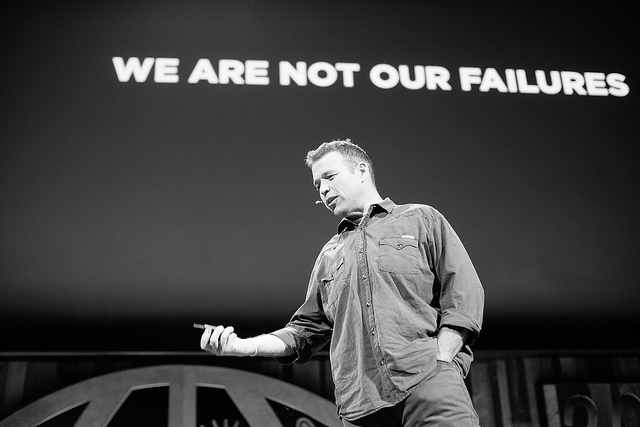 This was the speech I was looking forward to all weekend. His book, A Million Miles In A Thousand Years, has been a huge inspiration in our own lifestyle change in the past 2 years. We even did a series last year about writing a better story for your life, based on the book. Answering the first question is tough: Who are you? Does this answer match who other people say you are?

Donald spoke about answering these three questions and with that you can write your life into a meaningful story that you will be proud to read.

We Took Over Pioneer Square with a Bollywood Dance Party

We rocked out and danced the night away at Pioneer Square. I couldn’t find a video that did the night justice. Imagine 2,000 people dancing non-stop for over 2 hours – led by DJ Prashant. He was nuts, the crowd was out of control. It was a lot of fun…just sayin’. 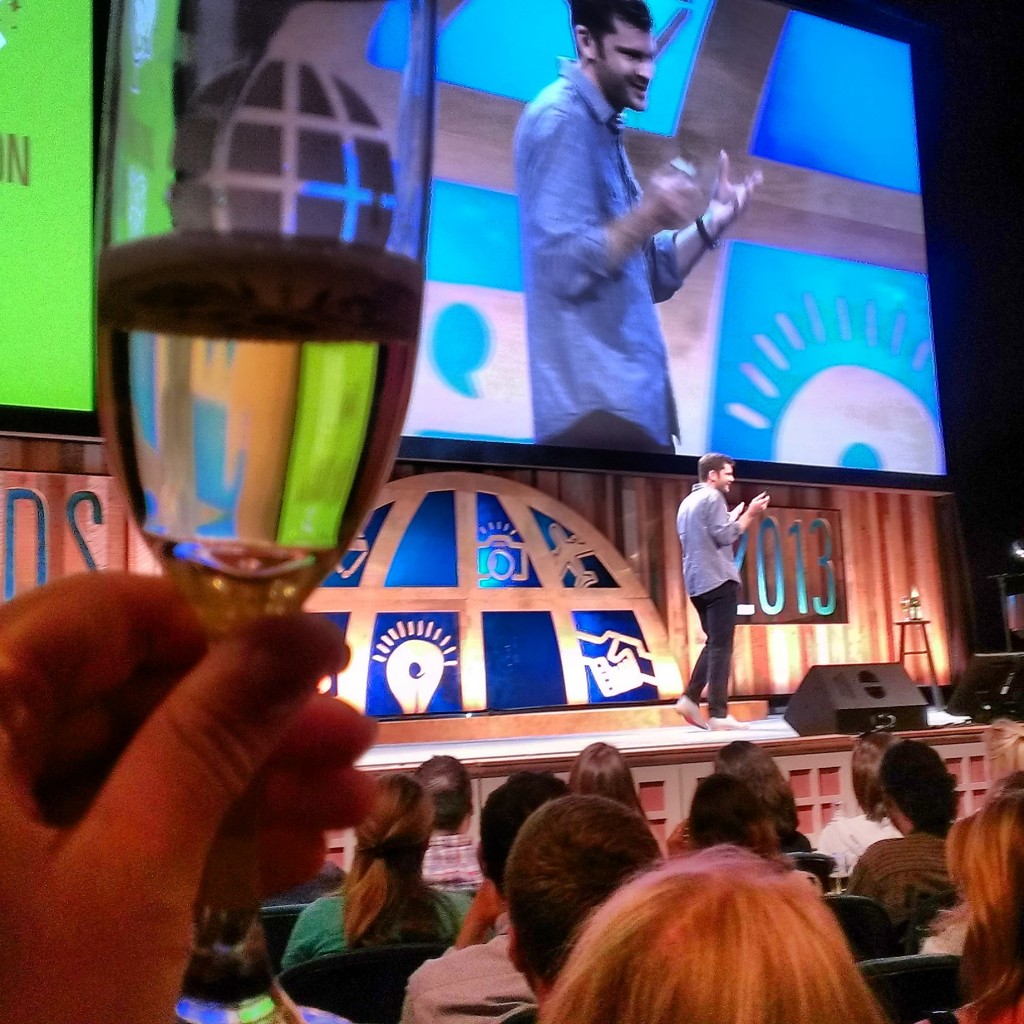 When you surround yourself with 2,999 other people trying to change the world, sing to their own tune and refusing to accept a mediocre life…it’s contagious.

There is always time to make a big change.

Don’t let your fear hold you back.

You don’t have to change the world all at once, start with your local community.

Always ask how can you give back, how you can help the person standing in front of you.

Lean on people, never hesitate to ask – the worst they can say is no.

The community you associate with will either hold you back or accelerate you forward so pick them wisely.

Do what you love, do what excites you and find purpose where you put your energy.

Whether or not you think a conference full of people trying to change the world is hokey and ridiculous, or you don’t believe in world domination – there were a lot of great takeaways from the weekend and I’m glad I was a part of it.